I submitted a piece of writing to a publication today and holy shit I had forgotten how stressful it is. Not the writing (okay maybe a little bit the writing) but the titling and proofing and second guessing whether you can even speak English.

I’m going to de-stress by looking at my recently-filled bank account and browsing Etsy for cute things. Speaking of cute, this arrived in my postbox the other day:

I love fan art zines and anthologies (this is going alongside Ladies of Literature Volumes I and II, and a Heroes of Olympus one). Reading them is the only time I ever wish I could draw as well as I write, because no one ever does writing zines… I guess they would be called books. Anyway thank you to Caroline who very nicely sent me this even though the project’s closed (can  I just say that the level of sleuthing required to find zines that aren’t taking orders any more but you want one anyway and were just broke and abroad when orders were open is insane).

I’m going to peruse it and play a game where I choose which artists I would want to illustrate my work… spoiler alert ALL OF THEM. Also if you have no idea which book series this zine is from you need to read The Raven Cycle immediately. I’ve even reviewed it for you, kind of.

You guys know how I’m always moaning that I’m a slave to my phone, right? And how I can’t see that changing without growing self-will and/or becoming very relaxed about the state of my internet-based job? Well, there may be a solution.

Full disclosure: I have not researched Vinaya’s competitors and I have an incredibly limited understanding of wearable tech in general, other than the knowledge I should probably avoid it (I mean, seriously, Apple Watch? You are an ugly piece of overpriced wiring that will make me more anxious. Piss off). But I love the aesthetics of Vinaya’s jewellery – it looks like actual jewellery, not like someone’s stuck a computer on a wrist strap.

Look at that person. They are someone I strive to be.

They’re also rich; prices start from £220 and the products are so new that some are only available to pre-order, which makes me think, were I inclined to spend £2.50+ on something pretty, I would wait until I had more info about how well the pieces actually work. But I like the philosophy behind the company – it’s founder, Kate Unsworth, did a tech detox and realised it was something that should be permanent. And pretty. You can read more Unsworth and the tech in this article if you fancy, you know, buying me one for Christmas…

In the mean time I will try to employ my phone’s silent mode more, and stick to putting it in a different room when I want to concentrate. What do you guys do to avoid overdoing phone time? Ever resorted to desperate measures? (I have considered locked safes and employing a PA, but for the cost I might be better buying a pretty necklace.)

When we walked the dogs this morning the sky was that white-blue hue unique to autumn and winter months; the air was crisp and verging on cold; the sun was low and almost too bright.

What the hell happened, Essex? Within half an hour you deleted the autumn setting in favour of the English downpour setting. I can no longer take a leisurely walk into town. I might not even take a hurried walk into town. Today has become the perfect time to curl up with a marketing plan and hot drink, plotting my rise to fame/fortune/financial independence, instead of a day stamping around Southend doing the marketing plan. Pfft.

Tell you what though, I know something you guys can curl up with if strategic Excel documents aren’t your thing. 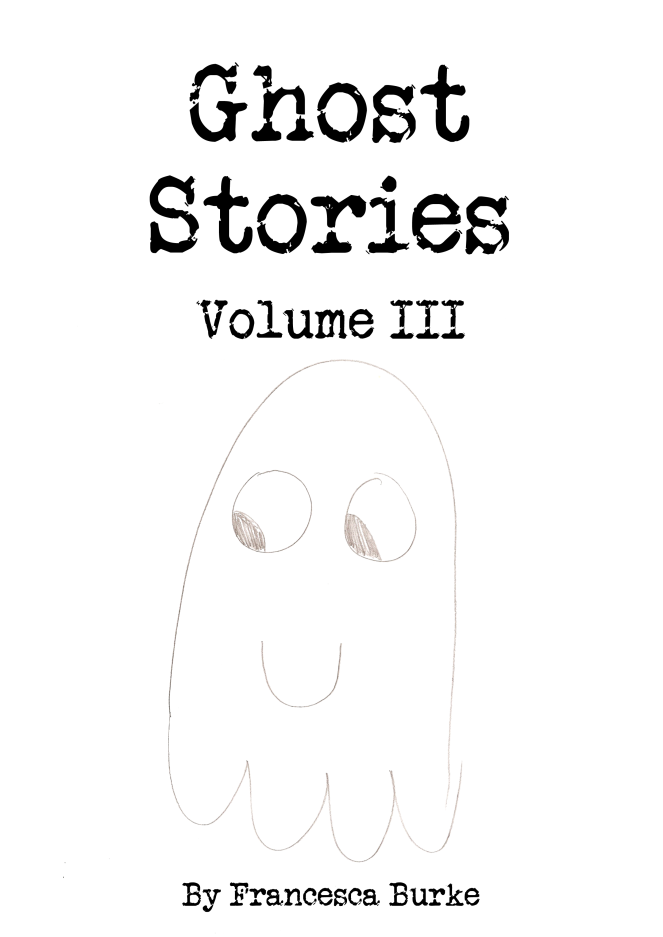 I have even made merchandise. I just checked the calendar and there’s a Friday 13th in May next year, but I’m not in the habit of planning that far in advance even with the old marketing ploys, so I haven’t decided yet whether or not I’ll do a fourth volume. I planned all three this year back in January and did most of the heavy lifting then too; today I am less inclined to reopen a set of Photoshop files that I spent 11 months tweaking. Still, never say never – I always forget how much I love working with the macabre and/or black humour until I’m doing it, and then I always wish I do it more.

Speaking of the macabre, my freelance work calls. Well, emails. Well, there’s a post-it on my desk reminding me I’m going out tomorrow so really ought to take advantage of the rain and get shit done today.

I didn’t get another jumper, but I did eat a lot of lunch.

I’ve got this really strange sensation of wanting to write a blog while not having a clue what to write about. There’s that feeling in my stomach saying ‘take a break from regular work and write a blog saying hey’, which is not a feeling to be ignored, but I’m genuinely stuck for a topic. I’ve considered National Writer’s Month but I don’t actually like the concept and I don’t want to spend 500 words bitching, and I’ve considered freelancing (I do like the concept, but I think I’d be bitching about that too), and a retrospective about how this time last year I was out in Greece. But do I want to look back at something in the past, or look forward? Tonight is Once Upon a Time night, so I want to look forward, to something I’m looking forward to.

I just noticed how tautological that phrase is, which makes me want to use it more. Anyway, maybe I’ll settle for saying hey, how are you? The weather here is grey, which matches my jumper, and I’m in two minds about walking into town to collect a book and craft fair supplies. On the one hand: fresh air, a new book and more supplies. On the other: it will probably rain, I have more pressing things to do and I’m going into town tomorrow anyway. Maybe I’ll meet myself halfway and walk to the post box… my office is feeling claustrophobic this afternoon but if I try to work from any other room I’ll probably just end up watching Once Upon a Time and forgetting I have a job.

The English language, holy shit. No wonder most of us use emojis.

Happy Monday darlings. After six-plus years, today I realised the merits of iTunes over YouTube streaming. I’ve also remembered how much I love The Fratellis… It’s a good thing I don’t claim technical brilliance, innit.

Speaking of the Internet, I’m trying to work out decent posts to magic up while I’m away. Does anyone have anything they’d like to see?

Just kidding, I know not a single person will tell me if there is… so I will probably mass-dump videos I like and talk about my favourite stuff, as per tradition.

There was actually something serious I had to say but I’ve completely fuckin’ forgotten it, so it was either not that serious or is completely pointless so doesn’t need worrying about. Either way my memory’s going so it’s time to go cuddle a dog and double-check my clothes for when I go on holiday. Did I mention I’m going on holiday? And I’m going to spend ten days of my life without the my phone beeping at me? I’ll be there in a week. I can’t find a GIF smug enough, so you’ll just have to imagine my shit eating grin.

I think I say this every year, but I really have no idea how to cope with the four day week thing straight after Easter. Is it Monday? Is it Tuesday? Is it time to eat chocolate? Tough questions when you’ve spent the last week binge watching Luther and hiding behind cushions whenever something creepy happens (ten times an episode).

But it’s back to work now, innit, because we’ve just started a new tax year and I am full of the joys of work. I’ve been spring cleaning the shop and there will be new shiny products there soon, which I will definitely not stop talking about. I’m considering having a contest or giveaway when new things go up; watch this space (or Instagram, as the case may be). I’ve also got to get another article for The Beard Mag done. So far I’ve covered the bog standard topics faced by every writer who’s charged to write about beards but does not have a beard: Conchita, a brief history of facial hair, alternatives to shaving foam, the media’s pressure on everyone to look a certain way… Gotta start thinking outside the proverbial box. My friends suggested an article on beard topiary, which is apparently a thing.

I’m going to break an unofficial habit of a lifetime and talk fashion.

Haha, not actual fashion, snowflakes, that’d require interest in clothing other than my jeans. Dolce and Gabana, yah.

So if you pay attention to LGBT news, fashion news or the general news, you’ve probably heard that Misters Dolce and Gabbana have got themselves into trouble with Elton John, and anyone who’s ever used IVF or been part of a non-traditional family. Even though Dolce and Gabbana are definitely not traditional. And neither are lots of their clients. And most people.

I think they’re hypocritical, and short-sighted for not having considered the potential backlash, but if they think IVF babies are ‘synthetic’, that’s their prerogative. I’m not that interested in the bitchfest that’s started up either, because it’s not that different from any other bitchfest, and any argument via Instagram makes me feel a bit like this:

My conundrum is that the other day I got an email from All Out. I love All Out – they’re a LGBT rights group that works almost exclusively through online petitions, which tend to call for political change in regards to LGBT equality. They campaign to stop deportations of LGBT people to countries where they could be imprisoned, for example, and helped ensure the Olympic charter was altered to prohibit discrimination of athletes based on sexuality. I get to help the civil rights movement by doing a small thing that can help a lot of people. Yay!

This week All Out sent an email asking me to sign a petition asking D&G to ‘use your platform to open minds, rather than spreading hate’. They point out that D&G have ‘become part of the problem and not the solution’, which is true. Straight homophobes will almost definitely use their comments as excuses for discrimination… ‘the gays only like traditional families, let’s deny them the right to be one’. It’s gross. Plus they’re undermining all of the LGBT people who are living in fear of their lives or fighting to have their rights recognised.

But if D&G wanted to use their platform to promote LGBT rights, they would. They’ve already backtracked/elaborated on their comments (which were made in a magazine so could’ve been misprinted slightly in the first place?) and apparently they have different views about IVF and family anyway – none of which are really anyone else’s business. On the other hand, do they have a responsibility to be pro-anything-which-supports-LGBT-people, both as LGBT people and major designers? If they do, should I tell them that?

My gut feeling is that they should be allowed to say whatever they want, but also that they should know better. I won’t boycott the brand, mostly because that would involve having the money to buy from it, but I would pause for thought before accepting any D&G castoffs. I’m just not sure if it’s my place, as someone who’s pro-freedom of speech, to tell someone what to say. What do you guys think?