I feel like the fact it’s both Remembrance Sunday and 25 years since the Berlin Wall came down is monumental, but I don’t really feel qualified to write huge political essays on the foolishness of war and European politics since I didn’t exist 25 years ago, let alone during World War I.

Looks kind of half-arsed compared to the finished product, huh.

I’m reading Child 44 at the moment (I typed it as Child $$, which should be a band) and it’s one of those books that’s best described as cold. Not in terms of the writing – it’s very good – but its story thoroughly depressing. When and where is it set?

That would be 1950s Soviet Russia.

For god’s sake, humanity, get your shit together and quit killing people! You’re only going to regret it!

I’m torn between yelling at the sky in exasperation and breaking down in noisy tears.

Still, today is a big deal for Europe history wise, which got me thinking about where I was when XYZ happened. I seem to remember being told about 9/11 on the way home from school, and I saw that Margaret Thatcher had died when I flicked the news on during crap TV ads. I think my mum was in Germany when Elvis died, and I missed the actual moment William and Catherine got married because I was trying to ask my nan why she thought I shouldn’t marry a Greek (someone had mentioned the Duke of Edinburgh).

So does anyone have any interesting anecdotes about where they were when? Please note I will probably be telling everyone I know your stories.

Since I got back from Greece this week, I thought I’d talk about some news stories about the Grecian part of Europe – or mostly, anyway.

Armenian Culture in Turkey: From the Ashes

The Armenian genocide comes up a few times in We Need to Talk About Kevin, which I read while I was away, and this story from The Economist was interesting. Why don’t genocides like this get taught in schools alongside the Holocaust? There’s Rwanda, the DRC conflict, all the shit Saddam Hussein did. Surely they’re just as relevant as the shit Hitler did?

This BBC piece is a teeny tiny story that will help out UKIP, but since I recently found out that some Albanian friends of mine were smuggled out of their country and were illegal immigrants, this made me think. There’s always two sides to a story and all that…

… Especially since British people don’t seem to want to work in restaurants anyway (via The Independent). For the record, the hardest-working people I can think of are Albanian.

I’ve only just discovered Vice, and I’ve not finished watching the video, but this article about Athens’ latest drug problem highlights that fact that while Angela Merkel and her friends are discussing bailouts, and while people are talking about how Greece “should just leave the euro” or whatever, the economic problems over there aren’t just economic – they’re social, and the longer the economic issues last, the harder it will be to fix the social issues. Just a thought for the IMF.

Apologies for the distinct lack of funny/Germany-related blogs, but I have had a pretty intense weekend and am still catching up on my beauty sleep. As you can tell, I need a lot of it: 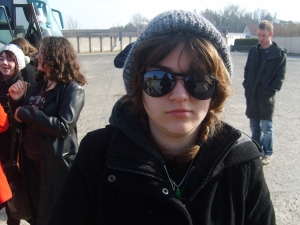 My camara ran out of juice a couple of times on the trip, so I need to raid some people’s Facebook pages and (this is a hint, guys) get some photos from my friends. You know what my email is. Once I’ve got enough stuff together I’ll work on a slide show or something – the only problem with this blog’s layout is the lack of space for photos. Either they’re too small to see or go in columns.

Anyway, as we got to Berlin via aeroplane, have a looksie at some complaints made to Thomas Cook about holidays last season…

I have a few of my own to add: