I’m bummed I can’t put the video on here, but I’m only just getting to grips with WP’s ‘PressThis’ button, and I don’t think it worked anyway. So you can have a picture of the band in their, er, ski suits.

For those of us who don’t live in the US, Yo Gabba Gabba is a children’s television show with costumed characters, animations and music. Gerard’s actually hinted at this happening before, in fact… So grab your raygun and start dancing along with the nearest four-year-old!

Was it just me who thought they were wearing their Killjoy gear but with shorts at first glance? Either way, I’m glad Party Poison’s hair’s made a comeback, even if it is for a programme where the children are told that ‘MCR’ means ‘Music Can Rock’. Does this mean that Every Snowflake is Different will feature on the next album?

Stay tuned for the billions of memes that will definitely emerge when this goes viral. Oh, wait. I just glanced at Twitter and look what’s trending: 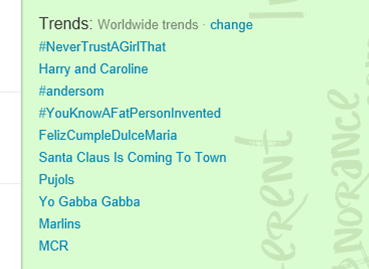 I guess not everyone appreciates the ski suits.

Here’s what Gerard had to say. Which wasn’t much, but Dewees was definitely supposed to be blue.