This week I posted my centenary blog and today it has been exactly one year since this. And this.

I still remember how the pit of my stomach fell twenty floors when I read that… How could they do this to us? The MCRmy is a family and FAMILIES TELL EACH OTHER STUFF. I was so freaked out I think I punched a tree. I was so distracted by the thought of my favourite band ending before I’d even got to see them live that I forgot to be nervous for my first GCSE module. One year on, MCR have definitely not broken up. I have seen them live twice and, because everything comes full circle, had another module this morning.

Looking back on it, I wasn’t just upset because Bob had left and they didn’t tell us (though that was part of their lives more directly than ours and they had – still have – the right to privacy). I was freaking out because I thought one of the only constants in my life was kaput. I’m pretty cynical when it comes to pretty much everything so I don’t trust an awful lot of people. I had put my trust in My Chem, and where the hell had it got me? A sore fist and some battered CDs.

Since last March, the band has made a comeback that is, quite frankly, way cooler than Take That’s first show with Robbie in fifteen years. Their music has taken a slightly different direction, their hair colour has swapped ends of the spectrum and you are now expected to bring rayguns to shows. Danger Days has changed the way My Chemical Romance are portrayed, again. 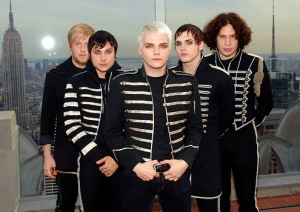 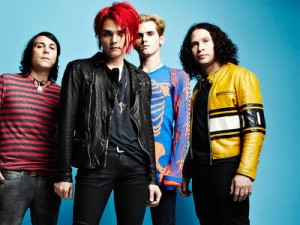 Thinking back to 23rd October and 12th February, two of the best days of my life because I got to see them live with some of the people who I love most in the world, I don’t think they would have happened if My Chem ended with Bob’s departure. We had to wait four years and deal with the fallout of the fourth-album-that-never-was-but-someday-could-be in order to get Danger Days. Looking at those pictures of the band over the last nine and-a-half years, some aspects of the band have never changed. Their determination to make art as different to their previous work as possible and their passion for what they do, for example.

Which is why I’m making an effort to tell you this exactly one year on: sometimes you have to be patient and ride out the storm. Sometimes something you think will last forever will kind of crash and burn while you watch. Sometimes, when you look back, that’s the best thing that could possibly have happened. In retrospect, I could have said things or treated people differently over the last twelve months and then maybe some of the stuff I’ve had to deal with wouldn’t have been so difficult… I will bet my My-Chem-commemorating ring you could have too.

But hey. Sit something out and perhaps it’ll turn into the most brilliant thing that’s ever happened.

12 thoughts on “One Chapter Ends and Another Begins… Or Maybe a Whole New Book.”