Morning. Or, Morning! if you’re feeling perky. I was until I sat down and now it’s just like an earlier version of the two o’clock slump which is not how I was planning my day off.

I’m not sure how many regular/committed readers there are still here, but if you’ve been following my posts as they go out, I suppose there’s an elephant in the room. Well, small dog. Well, small dog no longer in the room. We had Donnie put to sleep the week before last. I know that not everyone is particularly bothered about their pets, but I am not one of those people. Not having him around is strange and horrible and I keep forgetting and looking for a second dog and I’m paranoid Fred is pining and it’s odd only feeding one dog and I miss how he used to bark at literally everything and snore with his eyes open. I don’t miss the last couple of days of his life when it became abundantly clear that he had had enough. A lot of people say they fell guilty for making the decision to end their pet’s life, but I think I couldn’t have lived with myself if we’d made him hang on any longer when he couldn’t really walk and didn’t want to eat anything.

But I’m more interested in remembering the snoring and the ridiculous woofing, so maybe animal euthanasia is a subject for another day.

A non-sequitur that’s actually absolutely relevant if you live inside my head (a non-non-sequitur?): the next chapter of The Prince in the Tower, from The Princess and the Dragon and Other Stories About Unlikely Heroes is available to patrons today. It’s relevant because a) there’s a dog called Bean in The Prince in the Tower, named after Donnie. He used to do this dancing, jumping thing every time he was about to go for a walk or get fed, so I used to call him a jumping bean. Which became Bean and then Bean Sprout, then Sprout and honestly what is up with pet owners and nicknames. Anyway. Point b) is that I got to hang out with my friend Tatchiana the day before Donnie died and she gave me a very cool illustration from The Princess and the Dragon that was a huge bright spot in an appalling week. Spoiler alert there’s a dragon: 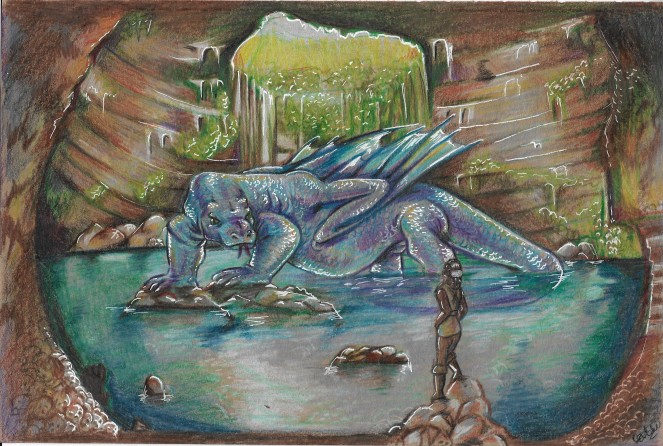 So you guys who aren’t patrons need to become patrons so we can make an ebook from this story and I can commission more artwork because it is seriously the coolest, coolest thing seeing your story interpreted in someone else’s art! It’s very nice knowing that I can support someone else’s work at the same time as doing something fun and promotional for my own work. It feels very eco-system-y. (I am paying Tatchiana for the piece, although she wasn’t convinced I needed to which is very friend-y. When I am feeling less bereaved and more awake we should have a conversation about paying friends for work. It’s a lot like euthanasia in that no one wants to talk about it but we’d probably all be better off if we did. God what a sentence). Oh, I’m also paying Tatchiana using money from Patreon. From your investment in my fairytale. How cool is that? We’re starting to accrue enough to pay my proofreader, Maria, as well. THE PLAN IS WORKING.

You can find links to Tatchiana’s other work here and buy her coffee (please do!) here.

Right, I’ve got patron letters to write and some Etsy orders to package. See you soon.

One thought on “A Shitty Week ft. the Coolest Illustration I’ve Seen All Year and Probably Ever”