In a bid to establish Indifferent Ignorance as a Serious Website, I have decided to host an annual award ceremony every December, giving random awards to whatever and whoever I fancy at time of writing (so maybe the whole thing’s not too serious after all).

Best Advert Placement in a Magazine

I keep a couple of scrapbooks full of newspaper articles and band interviews I’ve enjoyed… this one might have to go into the MCR section when I get around to sorting my magazines out. Read the actual article here.

CassieTheVenomous.com. If she isn’t Tweeting news, she’s writing about it on her blog. In amongst the usual news – and other band stuff, MCR isn’t the only topic she discusses, like some of us – there are tips on how to dye your hair properly, what not to bring to live shows and Danger Days explained. She also owns a bird named Doctor Zeropercent.

Who doesn’t want right-angles bunches or stripy curls or a hair colour that matches their luminous Killjoy mask? All three of us win.

AskPoison. I really, really love this website. More than I love Heroes. I’ve considered getting a Tumblr just to spam the artist with questions… Her Party Poison is someone I actually want to exist in real life. Look at his wise words:

Also, that is my answer to that question, should it ever arise.

New Favourite Musician of the Year

Biggest Conundrum/Moral Dilemma of the Year

This. And then this and this. I hate MCR fan fiction; the only time I ever read it was either when doing research for friends’ oneshot gifts (the shit I put myself through for them…) or when I first had a DeviantART account and needed my writer’s ego boosting. Because that shit is bad in every. Conceivable. Way. So when someone on my Twitter timeline posted a link to Unholy and I was looking to waste ten minutes, I thought “Why not? I’ll feel so smart after scanning half a page.” So I clicked, I scrolled, ignoring the blurb completely, and read the first few lines. By the end of the first full paragraph, I was hooked. Because – and I’m not saying this in my defence, I know I’m a hypocrite – this series is one of the best I’ve ever read. The author can write. Properly. Less than half way through, I was forgetting it was a fan fiction because it was literally just a story. A story with some of my favourite things to boot: tattoos and piercings, religious debates, near-death experiences and an overall understanding of humanity. If I ever learn to write fiction half as well as Bexless, I’ll be happy.

SO WHY DOES ITS ONLY SHORTCOMING HAVE TO BE THAT IT’S A MY CHEMICAL ROMANCE FAN FICTION?  WHY NOT ANY OTHER PARADOX? WHY??????

Nicest Message Left By a Loved One 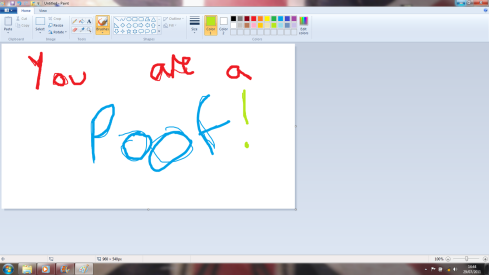 Thanks, Isobel. I’ll get that tattooed someday.

This year it goes to Glenn Beck, for deciding MCR is spreading propaganda (for what, I don’t think even he knows). Living on the railways indeed…

So, that’s it for this year, snowflakes. Be nice and you might get a feature in the next award ceremony. Coming soon(ish): Shit I Did in 2011. Or words to that effect.